Collecting the cars and a lesson on driving laws in China

On Thursday, we had a lecture from the senior traffic officer in Beijing, via an interpreter, as to how we should drive in the PRC.  This very informative lecture included advice such as determining which side of the steering wheel was on, being prepared to brake at green lights, and no sliding down hills.  Also, casual lane changing was prohibited.  The people who would have benefited most are the other thousands of drivers on Chinese roads.

Friday morning having been given such valuable advice yesterday, we were able to collect or Chinese driving licenses and a number plate for the car.  When Laurette checked details on our number plate we discovered that we had been given someone else’s number plate. We quickly tracked down the other team and exchanged plates 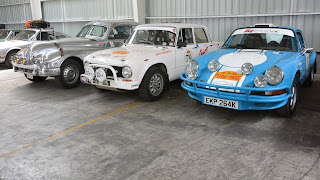 Later that day we were bussed out to a warehouse an hour or so from the hotel to collect the cars.
The fuel tanks had been drained in Melbourne so that they held only a couple of litres, or in our case it appears that the engine had been left to idle for several hours to reduce the fuel load which resulted in fouled plugs.

After removing and cleaning each plug Avanti started and unlike some others made it to the nearest fuel station to fill up. Quite a few cars ran out of petrol or sputtered into the filling station on fumes.

After a drive back to the Hotel we parked up and left scrutineering for Saturday due to the queue of cars already waiting.   That night we had cocktails on the lawn and then dinner in the dining room.
Posted by Avanti Alfa at 17:03