Following the dirt training, we took Avanti over to Stuckey Tyres for the fitting of 6 new Pirelli
P Zero K4 rally tyres.   These had not been fitted earlier for two reasons.  The first reason was that learning to drive the car on gravel with normal radials will allow it to let go at lower speeds and when the rally tyres are fitted it will have greater grip than I am used to.   The second and main reason was that with 14,000 kms to cover on Peking to Paris they had to be saved for as long as possible.

Whilst Avanti was having tyres fitted, I took the time to inspect the Land Crab in their foyer.  this car competed in many rallies including the same "1993 London to Sydney Marathon" as Avanti did. 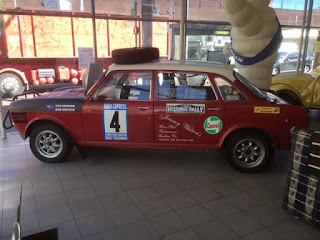 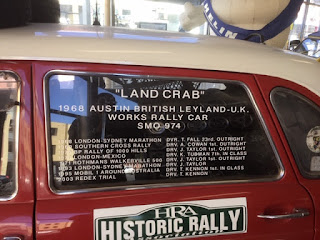 I imagine that is fairly rare that two cars which competed in the same rally 26 years ago would be under the same roof by coincidence.
Posted by Avanti Alfa at 17:08